There it is. All in the title. Maybe some have noticed that his name has disappeared from my bio descriptions on social media, that I haven’t posted anything about him in awhile, that both of our relationship statuses have been set to “single”. Probably not, though. I haven’t written any lengthy, broken-hearted posts, or deleted every last picture off of my accounts. But yes, in case you were wondering, this all means one thing: he and I are no longer together after two-and-a-half years. I thought he was The One, but he wasn’t. It didn’t end well, and none of it was my decision. Period.

This could be shocking to you, or it might not be, but either way the last couple of weeks have been some of the most difficult of my life. This post isn’t to bash him, or to get some twisted sort of revenge online. I’m not going to give any more details than I already have. The rest aren’t relevant to the Internet. What this post is about is healing, and how I’ve begun to do just that. In fact, I want to document this process here over the next couple months to prove that even when a major plan for my life fell apart, I kept going. This breakup doesn’t define me, and that relationship never did, either. But it’s taken a lot out of me that I want to learn to replace with healthy, faith-based, focused things. 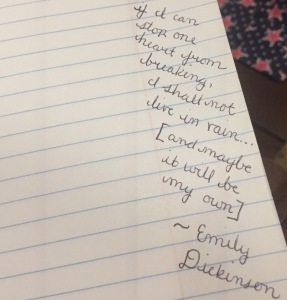 The first week was almost unbearable. There was so much strain and confusion in my heart that has evolved into trusting God, and knowing that whatever the reason is for this, it’s because He has the best plan for my life. This is a part of that plan; it fits in just as perfectly as all the triumphs. The second week was a lot better. Still so many tears, but peace started to leak in bit by bit. It has a way of doing that. There was never one rush of, “Wow, I feel peaceful now. I am completely healed in one instant.” No. Just no. It’s still working its way through the piecing of my thoughts, and it’s made getting up in the morning a lot easier. It’s steady and it’s progressing, and that in itself is peaceful.

Now, we’re at the third week. So far, pretty good. My focus has been re-sharpened for all the things that had to share my attention with the relationship: school, work, leading youth at church. I’ve been visiting family, and going on shopping trips. I started watching baseball again (end of the season, I know. But better late than never!). Week three has been refreshing so far. Here’s to the rest of it.

What this experience has shown me more than anything else is that I have some of the greatest people on the planet surrounding me. I’ve leaned on them so heavily in this difficult time, and they haven’t wavered. To you, all of my family and friends who have talked with me and supported me over these last few weeks: thank you. I hope that you know that I will always appreciate your time, energy, and love. This whole healing process would be impossible without you. Thank you.

Life is who you surround yourself with. I’ve stood by that phrase so very much over the course of this year, and my goodness, has it been proven to me. I hope that you’ll tuck those words in the back of your mind.

I have immense hope for tomorrow and the days to come, God willing. The wheels have kept turning even though I’ve felt like my lungs were frozen and couldn’t breathe at all. God never stops working for our good. Ever. And as much as I stubbornly wanted to ignore it, I couldn’t help but think that God had a purpose for this relationship and He has a purpose for its end, too. I can be content with that. With trust.

Trust is a faulty thing. Humans play with it far too much. But God. He can always be trusted. And so, I will trust. I will have faith. I will hope. I will love. 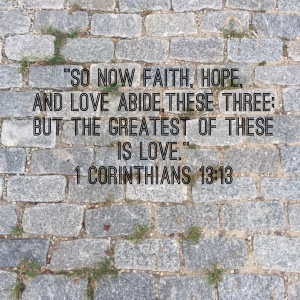 One thought on “Healing Part I: The Man I Thought was the One Broke my Heart”

This site uses Akismet to reduce spam. Learn how your comment data is processed.